Welcome to the Blog + Review Tour for No Unturned Stone by David James Warren, hosted by JustRead Publicity Tours! 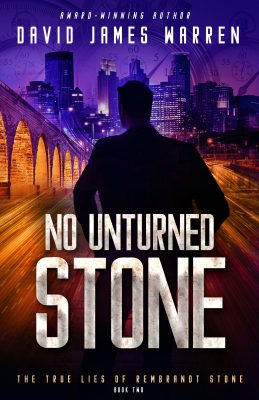 The One Rule Is, Don’t Mess With The Past But he did, and now ex-detective Rembrandt Stone is reaping the devastation of ignoring those words when he traveled back in time to solve the one case that had haunted his dreams. Yes, he solved the crime. Yes, he saved lives. But Rembrandt returns to find the unthinkable has happened and his life has shattered. There’s only one answer: break the rule again. Go back in time once more, fix what went wrong, save what went right, and yeah, in his spare time solve another brutal crime. But it’s not so easy to change time, especially when time turns you into a target. And of course there’s the strong possibility if he goes again, he’ll never get back. Get ready for your mind to be blown in Book 2 of the time-travel suspense series, The True Lies of Rembrandt Stone.

BOOKS IN THIS SERIES

James L. Rubart is 28 years old, but lives trapped inside an older man’s body. He’s the best-selling, Christy Hall of Fame author of ten novels and loves to send readers on mind-bending journeys they’ll remember months after they finish one of his stories. He’s dad to the two most outstanding sons on the planet and lives with his amazing wife on a small lake in eastern Washington. More at http://jameslrubart.com/

Susan May Warren is the USA Today bestselling, Christy and RITA award–winning author of more than eighty novels whose compelling plots and unforgettable characters have won acclaim with readers and reviewers alike. The mother of four grown children, and married to her real-life hero for over 30 years, she loves traveling and telling stories about life, adventure, and faith. For exciting updates on her new releases, previous books, and more, visit her website at www.susanmaywarren.com. CONNECT WITH SUSAN: Website | Facebook | Instagram | Twitter David Curtis Warren is making his literary debut in these novels, and he’s never been more excited. He looks forward to creating more riveting stories with Susie and Jim, as well as on his own. He’s grateful for his co-writers, family, and faith, buoying him during the pandemic of 2020, and this writing and publishing process.
CONNECT WITH DAVID: Instagram

(1) winner will receive a print copy of Cast the First Stone & No Unturned Stone! 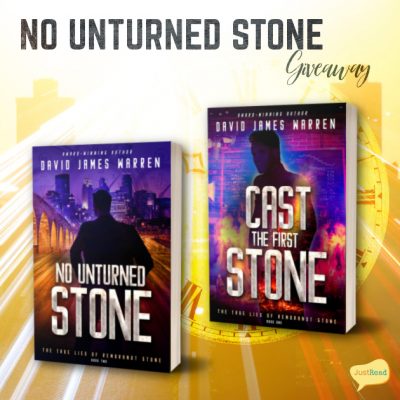 Full tour schedule linked below. Giveaway began at midnight April 6, 2021 and will last through 11:59 PM EST on April 13, 2021. Winner will be notified within 2 weeks of close of the giveaway and given 48 hours to respond or risk forfeiture of prize. US only. Void where prohibited by law or logistics.

About No Unturned Stone

What if you were able to visit the past, to right a wrong or solve a crime?

And…what if you did that but when you returned to your own timeline, you’d lost all that you valued in your life?

That is Rembrandt Stone’s story. In Cast the First Stone, the first book in THE TRUE LIES OF REMBRANDT STONE series, Rembrandt is given a special watch that enables him to return to the past, where he solves a cold case. When No Unturned Stone begins, he has returned to his own time. And he’s lost everything. His wife. His daughter. In addition, apparently he’s begun a love affair with alcohol.

There are new tragedies everywhere. But, Rem thinks, he can fix this! He’s got the watch, he’ll just go back in time and undo the things that he messed up before.

Before he can head back, Rembrandt and his boss (and sparring partner) Burke have a series of cases to solve. In fact, Rembrandt is the head of the police task force to find a serial killer. But Rem is a wreck. He has bounced back into a present that bears little resemblance to the one he’d been in before the watch took him back and he’s having a lot of trouble recognizing what is apparently his life. He is a mess. He can see the evidence, but has no idea what events transpired to get him here.

But, there is a crime victim who survived the serial killer’s attack. There’s a press conference to announce the latest on the crimes to the media. There is also a watchmaker, Art, that Rem believes can help him to get his life back in order; but when he visits the old man, he finds another life that has been dramatically altered.

Art has some time travel wisdom to impart. Could it be possible to create a rewrite? The alternative is an empty life Rembrandt can’t imagine. So returning to the past is clearly the only hope for the detective. Still, it’s hope where he had no hope before.

If he can only rewrite a past that brings his marriage and his child back.

No Unturned Stone is a fantastic, nail-biter of a story. I could not put it down. If I hadn’t known that it was written by three authors working together, I’d never have imagined that it wasn’t written by only one person! The style is spare yet vivid; it’s definitely a detective story/police procedural (one of my favorite genres). Yet the fantasy elements of time travel are woven in quite naturally. The two styles combine beautifully to provide a suspenseful and eventful novel with appealing characters.

Rembrandt is a fascinating narrator. And he really does desire to do what is right. The trouble is, while he knows how to be a detective and a friend, he is woefully ignorant about how to be a successful time-traveler. He really believes he can make the wrongs right. But he’s missing the owner’s manual on the watch that tells him everything to do…and not do.

Most of us have probably thought that, if we only had a time machine, we could fix this or that problem or event from our pasts. But anyone who has watched a time travel or science fiction film knows that the space-time continuum is delicate and fragile; one tiny difference can alter history or civilization, as well as individual lives. Rembrandt has all the right hopes and dreams, but what will his actions accomplish…or destroy? Read No Unturned Stone and find out!