Welcome to the Blog Tour for Rose Among Thornes by Terrie Todd, hosted by JustRead Publicity Tours! 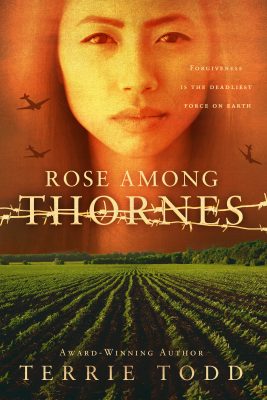 Forgiveness is the deadliest force on earth. War might be raging overseas, but Rose Onishi is on track to fulfill her lifelong goal of becoming a concert pianist. When forced by her government to leave her beloved home in Vancouver and move to the Canadian prairie to work on the Thornes’ sugar beet farm, her dream fades to match the black dirt staining her callused hands. Though the Thorne family is kind, life is unbearably lonely. In hopes that it might win her the chance to play their piano, Rose agrees to write letters to their soldier son. When Rusty Thorne joins the Canadian Army, he never imagines becoming a Japanese prisoner of war. Inside the camp, the faith his parents instilled is tested like never before. Though he begs God to help him not hate his brutal captors, Rusty can no longer even hear the Japanese language without revulsion. Only his rare letters from home sustain him—especially the brilliant notes from his mother’s charming helper, which the girl signs simply as “Rose.” Will Rusty survive the war only to encounter the Japanese on his own doorstep? Can Rose overcome betrayal and open her heart? Or will the truth destroy the fragile bond their letters created? 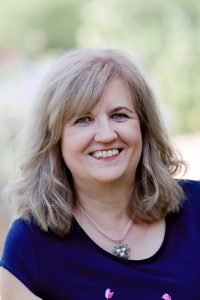 Terrie Todd is the award-winning author of The Silver Suitcase, Maggie’s War, Bleak Landing, and Out of My Mind: A Decade of Faith and Humor. Her next novel, Rose Among Thornes, releases in August 2021. The Last Piece releases in November 2021. Terrie is represented by Mary DeMuth of Books & Such Literary Agency. She lives with her husband, Jon, in Portage la Prairie, Manitoba, Canada where they raised their three children. They are grandparents to five boys. When she’s not writing, Terrie can usually be found reading, cleaning, cooking, painting, weeding, watering, or watching something. You can follow her at www.terrietodd.blogspot.com

(1) winner will receive the winner’s choice of one print copy: The Silver Suitcase, Maggie’s War, or Bleak Landing! 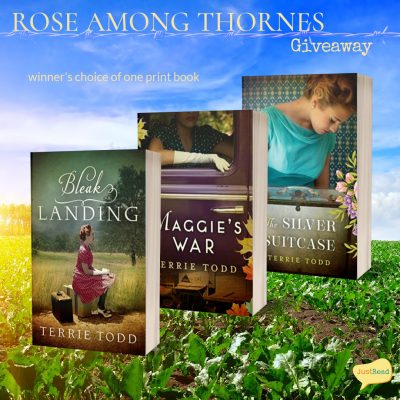 Full tour schedule linked below. Giveaway began at midnight August 30, 2021 and will last through 11:59 PM EST on September 6, 2021. Winner will be notified within 2 weeks of close of the giveaway and given 48 hours to respond or risk forfeiture of prize. US/CAN only. Void where prohibited by law or logistics.

About Rose Among Thornes

Rose Onishi of Vancouver is like many teenaged girls of her era. She and her best friend Freda adore movie stars and films, glamourous evening gowns (not they actually own any), and cute boys. Music as well, though Freda is a violinist and Rose, a gifted pianist. Rose’s heartfelt goal is to attend college, and then, to become a concert pianist. It actually could be possible for Rose; music flows from her soul and her fingertips, and she can master the most difficult of compositions. Her chief obstacle to this goal seems to be her mother, who’d be happy to keep her at home. Their might also be an issue with her family tree. Rose’s grandfather immigrated to Canada from Japan. Her parents are Canadian citizens of Japanese heritage, as is Rose, though she doesn’t even speak Japanese. “Casual” racism does affect them from time to time; but they are and remain proudly devoted to the Canadian flag.

East of Rose’s Vancouver, in Winnipeg, Manitoba, Rusty Thorne prepares to say goodbye to his family (and the family beet farm) as his orders direct him to head west for parts unknown. He was, most recently, in tropical Jamaica. But it’s 1941, and it could be anywhere. As Rusty and his best friend Bert discover, Hong Kong is their destination, to stand together with the British against a possible attack from Japan.

Rose and Rusty, though they’ve never met, have no idea that the attack on Pearl Harbor is just a few days away, and it will turn their lives upside down. Rose and her family are sent to several internment camps, away from Vancouver into the interior of Canada. Eventually they end up in Manitoba, at the Thorne family’s sugar beet farm, as resident workers. Rusty and Bert are taken prisoner when Japan actually does invade Hong Kong, and are sent to harsh prisoner of war camps. Rusty is thankful to have Bert and his Christian faith as life becomes harder, then unimaginable. Eventually, the soldier and the pianist/farm worker become connected in the oddest of ways; through letters written back and forth. Rusty knows that Rose is living and working with his parents on their farm, yet he is unaware that she is of Japanese origin; from the same roots as the cruel and merciless guards of the prison camp, which he is becoming less and less able to regard with anything but hatred.

Terri Todd has written this book finely and beautifully, although its protagonists experience some of the darkest of life’s tragedies: internment, for Rose, and imprisonment in a Japanese POW camp, for Rusty (although worse than that is coming for him). If you’ve read any of Louis Zamperini’s story, you know a bit about what Rusty is living through. Rose too, is suffering, in very different ways: loss of her home, possessions, and dreams, and even to an extent the loss of her identity as she lays music aside and takes up sugar beet farming. Yet their letters connect them and encourage them; Rose’s faith and joy brings light to the darkest moments of Rusty’s captivity. And looming ahead of them is, years away, the end of the war and the moment they might just meet.

I became, rather quickly as I read, deeply devoted to and connected to Rose and Rusty, and their families. I loved Rose’s growing faith, and thought Terri Todd perfectly described what might have happened when, like Joseph of the Bible, Rusty was dropped into the deepest pit. I was touched by their circumstances and their perseverance, both in very different ways. Yet there were moments when I almost felt liked I’d been clotheslined (to use a football metaphor) as I read further into the book. Those bad things weren’t supposed to happen to people I loved! (Yes. I do feel profoundly for fictional characters in books and movies. I’m sure many of you can relate. I know it’s fiction; but they truly feel like real people to me when I’m in the midst of a story.) But Rose Among Thornes is honest, and it’s truthful, and Terri doesn’t take the easy way out when she could. That can be painful to read sometimes, but it elevates her story to excellence because of her choices.

In the end (well, and also throughout the story), I loved Rusty and Rose. They are so understandable and appealing, whether they’re suffering, in pain or in joy. Rose Among Thornes takes a particularly painful part of human history and makes it personal by introducing us to characters we love who are living out what for us, is in the past. You’ll find reading this well worth your while, and I recommend it to you. Just have a hankie or tissue nearby.