Welcome to the Blog Tour for The Girl with Stars in Her Eyes by Dawn Ford, hosted by JustRead Publicity Tours! 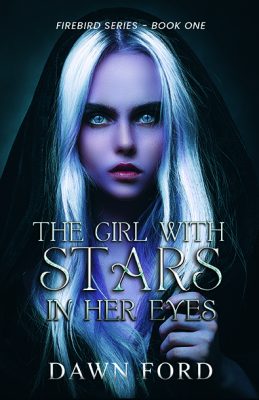 Eighteen-year-old servant girl Tambrynn is haunted by more than her unusual silver hair and the star-shaped pupils in her eyes. Her uncontrollable ability to call objects leads the wolves who savagely murdered her mother right to her door. When she’s fired and outcast during a snowstorm, her carriage wrecks and she’s forced to find refuge in an abandoned cottage. There, her life is upended when the magpie who’s stalked her for ten years transforms into a man, Lucas. He’s her Watcher and they’re from a different kingdom. His job is to keep her safe from her father, an evil mage, who wants to steal her abilities, turn her into one of his undead beasts, and become immortal himself. Can they make it to the magical passageway and get to their home kingdom in time for Tambrynn to thwart her father’s malicious plans? Or will Tambrynn’s unique magic doom them all?

Winner of the 2016 ACFW Genesis Award and finalist in the 2018 Grace Award and the 2020 Great Expectations Contest, Dawn Ford has been recognized for her published and non-published works. Her flash fiction stories have been published in Havok magazine under both her real name and pen name, Jo Wonderly. Her debut novel, Knee-high Lies, was published in 2017.

As a child, Dawn often had her head in the clouds creating scenes and stories for anything and everything she came across. She believed there was magic everywhere, a sentiment she has never outgrown. Nature inspires her, and her love for the underdog and the unlikely hero colors much of what she writes. Dawn adores anything Steampunk, is often distracted by shiny, pretty things, and her obsession with purses and shoes borders on hoarding. Dawn lives in Iowa and helps her husband run their foodservice and catering business out of Omaha, Nebraska. When not reading, writing, or catering, Dawn loves babysitting her grandchildren, is parent to Snickers the Wonder Beagle, and can usually be caught daydreaming. You can learn more about Dawn Ford at her website: https://dawnfordauthor.com CONNECT WITH DAWN: Website | Facebook | Instagram | Twitter

(3) winners will receive a $10 Amazon gift card, a signed paperback copy of The Girl with Stars in Her Eyes, and book swag! 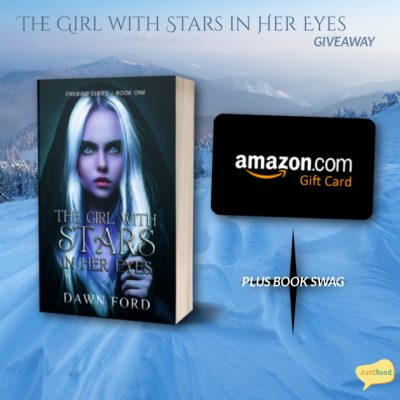 Full tour schedule linked below. Giveaway began at midnight May 16, 2022 and will last through 11:59 PM EST on May 23, 2022. Winner will be notified within 2 weeks of close of the giveaway and given 48 hours to respond or risk forfeiture of prize. US only. Void where prohibited by law or logistics.

I have to admit to you, I was captivated first by the unique title of this book; and its equally unusual cover art. But as I read the book’s description, I was also captivated by Tambrynn, the book’s heroine. How awful to have perilous abilities you don’t understand and cannot control; and worse, that your own parent wants to steal them from you?

Of course, Tambrynn doesn’t know her father at all. As in all the best fairy tales, Tambrynn is an orphan. Ten years after wicked wolves killed her mother and sent Tambrynn into indentured servitude, she’s used to being ill-treated and mocked for her silver hair and eyes with stars in them. But, she has developed strength and the heart of a survivor. (Plus, there’s those unwieldy gifts she doesn’t really know what to do with. They certainly sometimes get her in trouble, even if at times they’re very useful.)

All until another servant mocks and falsely accuses her, and she is ordered to be put in the stocks for punishment. And again, as in beloved fairy tales, this is the moment when Tambrynn’s life begins to change. The magpie, who followed her from household to household, transforms himself into a man; he is Lucas, her childhood friend and Watcher. (Not that she remembers him or much of those days.) And then, Tambrynn’s longed-for father appears.

The only trouble? The ravenous wolves are with him. And he is wicked and evil, and wants to steal Tambrynn’s gifts and abilities to add to his own.

And so begins Tambrynn’s tale. Like Cinderella, she’s been forced to work for years as basically a scullery maid. Like Belle of Beauty and the Beast, she’s in a land (not just a house) that is not her own. But The Girl With Stars in Her Eyes reads more like one of “The Chronicles of Narnia,” or perhaps like one of Tolkien’s tales. Tambrynn has an unexpected journey ahead of her that is filled with dangers and treasures she’s never imagined. There is a Kinsman whom she prays to; and a faithful companion, Lucas, who is there to rescue and guide her.

Who is Tambrynn? Why does her father plan such wickedness for and against her? What was her mother, Cadence, hiding her from?

I enjoyed Dawn Ford’s first book in her new Firebird Series immensely. The novel is well-paced, the characters and locales are perfectly imagined and described, and both Tambrynn and Lucas are fascinating, and a heroine and (maybe?) a hero you’ll chase through the pages so that you can discover where they end up The ending is satisfying–although it’s a momentary stop, not a complete ending, as there is much more to the tale of the starry-eyed protagonist and her form-shifting Watcher. Pick up a copy of The Girl With Stars in Her Eyes today, and don’t forget to enter Dawn’s giveaway. You might win a copy of this book plus book swag (and who doesn’t love swag!?).

Disclosure: I voluntarily reviewed a complimentary copy of this book which I received from the author. All views expressed are only my honest opinion.